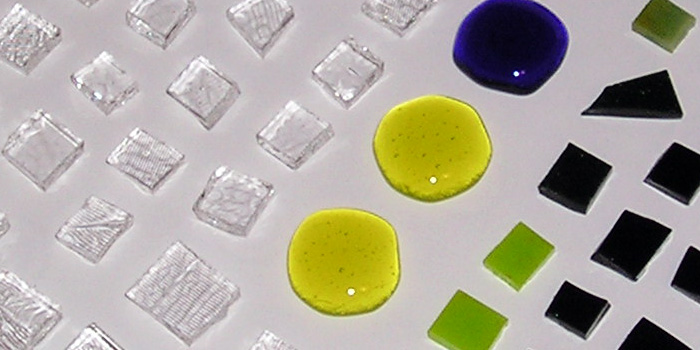 My apologies, again, I forgot to take an ‘after’ photo of the firing, but you should get the idea from my comments.

This firing was just to create a stack of clear and black dots, as well as rescue a few that didn’t work in a previous firing.

My plan for the dots is to use them in other items as decoration. Clear dots on a colour, when fully fused, give the appearance of a hole in the item. Many together give a sort of honeycomb appearance. The black dots will make great decoration as well, resulting in a nice defined point of reference for the eye. Mind you, being really new at this I can imagine a lot more uses and I am keen to experiment with these.

Anyway, on with the firing.

You can see from the photo that two thirds of the shelf is covered with just clear squares, single layer 3mm Bullseye 90 COE glass. I had tried a couple of these before and they did fuse into well defined round dots.

The other third of the shelf includes the same in black glass and a few odd shapes as well, out of curiosity, and a number of dots that did not fully fuse in a previous firing. I expected these to complete firing and fully round out.

Well, most of the clear dots worked fine, with only a few not forming perfect dots. These were the larger ones. I think a little grinding and shaping would have helped, and possibly making them two layers.

Same with most of the black dots. Just a couple didn’t round completely.

The ones I tried to rescue sort of worked. Again, they fused better, but not into complete dots. This did surprise me a little but it could be because of glass volume. They were two 2mm layers of glass, not 3mm, so maybe surface tension could not pull them back into a nice round dot. Or it could be the temperature wasn’t hot enough or held long enough.

Something I have heard is to always fire for the largest piece in your kiln, so maybe that is something I didn’t do.

I had a couple of coloured dots in there as well and they did work perfectly.

There does seem to be a little variance in result due to the colour of the glass so that is something I need to keep in mind and make note of.

Because all the pieces in this firing were very small, I ramped up to target processing temperature at full speed. I had no concern about cracking the pieces and this seems to work fine.

I also decided to crash cool after processing was complete by opening the kiln door until down to 560 C and then let the segment finish and cool naturally.