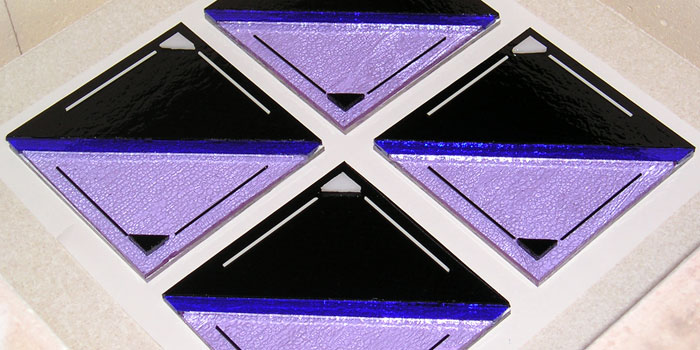 My son recently purchased and moved into a new apartment, his first, so thoughts turned to an ‘apartment warming’ gift. I thought about making a clock to match his décor, but the last clock I made didn’t work that well so I decided not to test my luck.

After a little thought and discussion with Ann a set of coasters seemed a good idea. I had made a set previously and they worked okay, so I felt confident.

His décor is basically black and white, with a few blue highlights. So I decided to try and do something similar. Not knowing the exact colour of blue meant a bit of a guesswork was needed.

I decided on a design that is a little geometric to also match what I think is his style, plus it wasn’t to challenging.

But, as usual, it didn’t all go as planned.

All glass used is Bullseye 90 COE. I have included the Bullseye codes for a couple of the colours.

The transparent light blue was cut smaller to allow for a rich blue strip to be placed between the triangles. The strips of rich blue (no code as they were unmarked offcuts) were then cut and the ends ground to 45 degrees.

The small black and white triangles in the corners were also cut from 3mm glass. Sorry, no code for the white.

The fine black and white lines were added using stringers.

Everything was glued in place. The stringers tend to roll about easy and having to reposition them in the kiln is a little difficult, so gluing seemed to be the best option.

A close look at my glass cutting will show it isn’t that great yet. I obviously need to try a little harder in that area, and to probably grind edges to get them neater. I tend to be a bit impatient when building pieces so that is something I need to work on as well.

The coasters were placed on Bullseye Thinfire shelf paper.

On the subject of cleaning glass, I had previously used Windex and did notice a little discolouration sometimes. I did source another cleaner called Earth Choice that has less chemicals and used that with these pieces. The ground edges were also scrubbed to reduce the chance of devitrification.

Yes, I forgot to take a photo. Another senior moment, or at least that’s my excuse and I’m sticking to it.

Trust me, the firing worked fine and the coasters did look fairly good. Not perfect, but hey, I am still learning and that is the nature of hand made.

The triangles in the corners were a little raised so using 2mm may have been a better solution, keeping the glass volume down.

There was no apparent discolouration from the cleaner used or from the gluing.

(2)
$17.99 (as of September 23, 2021 22:42 GMT +10:00 - More infoProduct prices and availability are accurate as of the date/time indicated and are subject to change. Any price and availability information displayed on [relevant Amazon Site(s), as applicable] at the time of purchase will apply to the purchase of this product.)