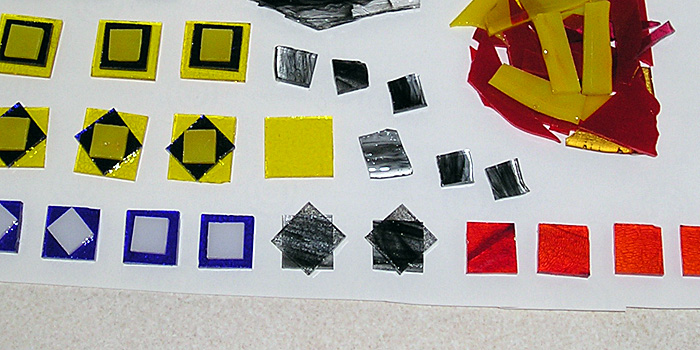 Hope you are enjoying this journey and I sincerely hope that I haven’t bored you into saying goodbye. Please hang in there, things will get more interesting.

This was another full fuse for cabochons, some dots and a puddle. You may ask why another test. Well, I firmly believe that testing to see what happens is a great way to learn. The mistakes and the surprising wins all are great teachers.

In this firing we are trying different numbers of layers all together to see how they work together in a firing schedule really set for the bigger pieces.

As usual, all glass is Bullseye COE 90 fusible glass.

In the top left of the ‘before’ photo you will see single layer 15mm pieces of grey transparent 2mm (1429). I wanted to see how a single layer larger square would behave.

To the right of that are 2 tests of 2 layers of off-white 2mm, then 2 chunks of glass that we received in the offcuts we purchased.

Below the grey there are 6 tests of 3 layers of 2mm – yellow, black and yellow set on the diagonals and square on.

Beside that a single 2mm piece of yellow and several clear/streaky black squares (sort of) to try for dots.

At the bottom we have a couple of 2 layer tests of blue and white 3mm set on the diagonal and square. Then a couple using 2 layers of the clear/black streaky 3mm and some single pieces of red.

On the far right is a stack of offcuts layered up for a puddle.

These were all fired on Bullseye Thinfire shelf paper.

We had some interesting results with this firing.

The single layer grey tests pulled in strongly on the sides and formed interesting little stars. This grey was iridised so the result could be used for some interesting project. This is basically what I expected from a single layer larger square.

The off-white pieces never finished forming into dots. This wasn’t expected, but is probably still related to just 2 layers of 2mm glass.

The chunks actually rounded off nicely, though still retained a little of their original odd shape. Still usable is some jewellery.

The black and yellow tests all worked perfectly, as did the blue and white. They formed up well and the differences between the diagonal and square layering is evident in the finished pieces.

The clear/streaky black formed nice dots so they were a success. The single layers of red actually changed colour to a much darker red but did almost form into round dots.

The stack of offcuts did fuse down quite well and formed an interesting puddle that I will cut up later to some features and cabochons.

Fortunately, there was no devitrification an any pieces.

In summary, the firing schedule used worked well for the main 3 x 2mm and 2x3mm layered cabochons, but was not hot enough, or held long enough, for the 2 x 2mm or single layers to form correctly. Interestingly, the single layers of the clear/black streaky did form up well. The type of glass is obviously a factor in the result, not just the thickness and number of layers.