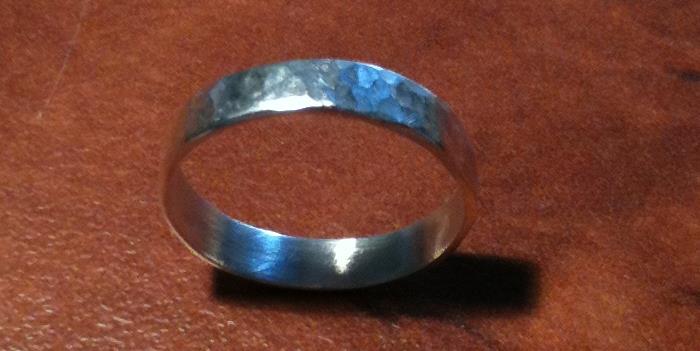 How did I find out about the new silversmithing classes?

Well, the clip on magnifying glasses I purchased didn’t quiet work for me.  So I decided to go to my optometrist and ask if they could prescribe a pair of glasses that would suit. While there I got talking to the assistant (who is also called Anne) and she told me that she goes regularly to silversmithing classes locally.

I was very interested in the classes so I  asked her to tell me more about them. She told me about what they do and how often they hold them. It sounded great so I asked her if she knew whether it was possible for me to join. Anne said she would ring the instructor (Elaine) who holds the classes. Then before I knew it she was on the phone and had me booked in for the following Friday.  It became obvious that Anne was keen to have me join the group. To make it more convincing,  Anne also offered to take me as she lived only a few streets away from where I live.

We arrived on Friday morning at the class, which is in a hall at the show grounds. I was introduced to everyone and they all seemed very nice. Elaine said to me that she will start me off with doing a ring. Elaine introduced me to Jean who was her assistant. She told me that she would have to get Jean to look after me as she had to leave and would be back a little later. Jean handed me a set of ring sizes and asked me to see what size ring I wanted. That all went fine and Jean cut a strip of rectangle silver wire for me to use. She asked me to shape the wire so that both ends were touching. I did this but was having a bit of trouble seeing as they didn’t have any bench lamps. Having a lamp over my work helps me see better. Once I had the ends touching properly Jean showed me how they solder the join. She began to tell me to get my solder and bend it in a u shape and put it over the join. It was a little unnerving at first as their techniques were different to the way I was shown at the Cobb and Co Museum classes.

While I was doing my ring Elaine arrived back and asked me how I was going.  I explained that I found that there techniques were different to what I had been shown at Cobb and Co. She said that the difference is that my instructor at Cobb and Co was a jeweller and herself and Jean were both self-taught. Elaine went on to tell me that in the long run I will develop my own techniques and it will all fall into place. She said that the main thing is that you learn the basics from us.

The finished ring that I did that day is at the top of this post. The stippling on the ring was a technique I learned using a ball peen hammer.

They also showed me how to make my own  jump rings with copper wire. With the jump rings I made what they called an idiot puzzle. This was a chain maille pattern, I did find it puzzling at first but worked it out.

It was such a great atmosphere that it wasn’t that hard to adjust. Everyone was very friendly and very encouraging.

Compared to my earlier classes that cost $150 per day plus materials, these classes were a lot cheaper, just $25 for the day, plus materials. I must admit, I was a little dubious about the value of the class before attending, but now look forward to the next class. The value is great.