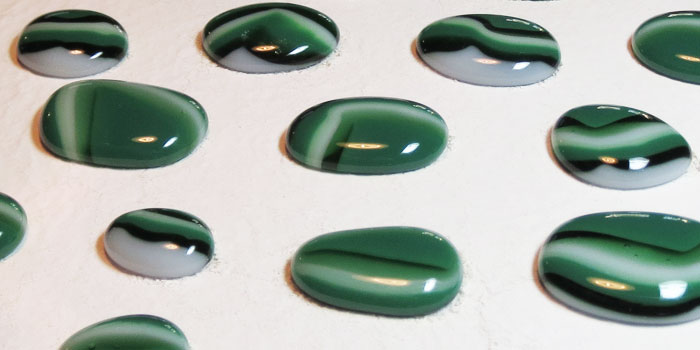 In Part 1 I covered making the puddle by fusing several sheets of Bullseye COE 90 glass, but didn’t get into how that became finished cabochons.

In this part I will cover making the cabochons from the puddle, from breaking up the puddle, grinding on a glass grinder and preparation, full fusing and a final fire polish.

Breaking up a puddle is always something that makes me a little nervous. I suppose it relates to the act of breaking glass, and not being able to control the break. Yes, I know that is the whole point, and what gives that random effect, but still.

The way I break the puddle is to lay it over a piece of timber so it isn’t flat on the table, cover it with a good thick rag and whack it with a hammer. This is done on several sheets of paper so I can easily fold them up, along with all the slivers, and discard in the rubbish.

Once this was complete I took them to the grinder and ground one edge flat enough so the piece stood vertically and didn’t lean, at least not too much. The reason for this is that if it leans too much it will fuse down and you will have one dominate colour on top, the colour of the top of the lean, and little banding.

Any fine edges or any real pointy bits were also ground off. Just so the fuse resulted in a more uniform shape.

All the pieces were then cleaned and placed on edge on Bullseye kiln paper for a fuss fuse. The firing schedule is below.

The result was good, but I did have a little devitrification on some pieces and a couple of rough edges.

The pieces that had bad devitrification were ground to remove most of it, but I didn’t worry too much as I intended to throw everything into the rock tumbler. I have found that 6-7 hours in a tumbler is enough to clean up any devit and remove rough edges.

In my tumbler I simply fill the barrel with a mix of small and larger pieces, along with a couple of tablespoons of silicone carbide tumbling grit, then water to just below the top of the load.

Six hours later the cabs were removed from the tumbler, cleaned well to make sure no grit remained, dried and placed on a prepared kiln shelf.

These were then fire polished to a beautiful shiny finish, as you can see.

Fire Polish – Same cabs as above after tumbling