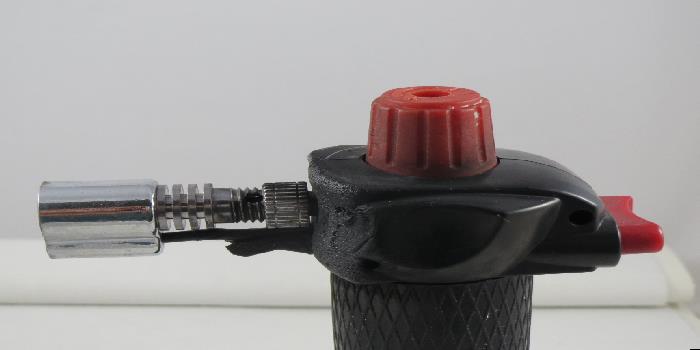 Micro Torches are a great tool but you need to be aware that buying cheap torches from hardware or some where other than a jeweller suppliers can be risky. My experience from buying a cheap micro torch has made me realize this and that is why I’m warning you.Using a micro torch is great when soldering small jump rings and any other little soldering jobs. So I decided to purchase a micro torch but of course I was worried about money so I looked for the cheapest one I could buy. I found a micro torch with a gas torch lighter as a package for $30. This seemed such a great deal.

It worked fine and I used it to do lots of jump ring soldering. I continued using it for almost 12 months. It was working fine until the other day.  The day started out fine I decided to make some thin stack able rings so I measured up the wire for the size I was making. Then shaped the wire for the rings, I decided to use the micro torch rather than using the bottle gas and oxygen torch. I got the micro torch ready and started to use it. Then I noticed it wasn’t making the usual noise it makes but I still went ahead and began to use it when I should have stopped there and then.  I continued to use it then it happened, I just looked at the torch and seen the whole thing covered in a blue flame. I dropped the torch on to my bench and began to blow on it,  luckily it went out. I was so lucky that it didn’t blow up.

This taught me a few lessons, 1 was if things aren’t work right to stop and check it out and 2 not to buy cheap products.

You see this torch I bought had rubber around it this is what had caught on fire it was also made from plastic. I have since ordered a new micro torch from Australian Jewellers Supplies there torch is a metal one so it can’t catch on fire.