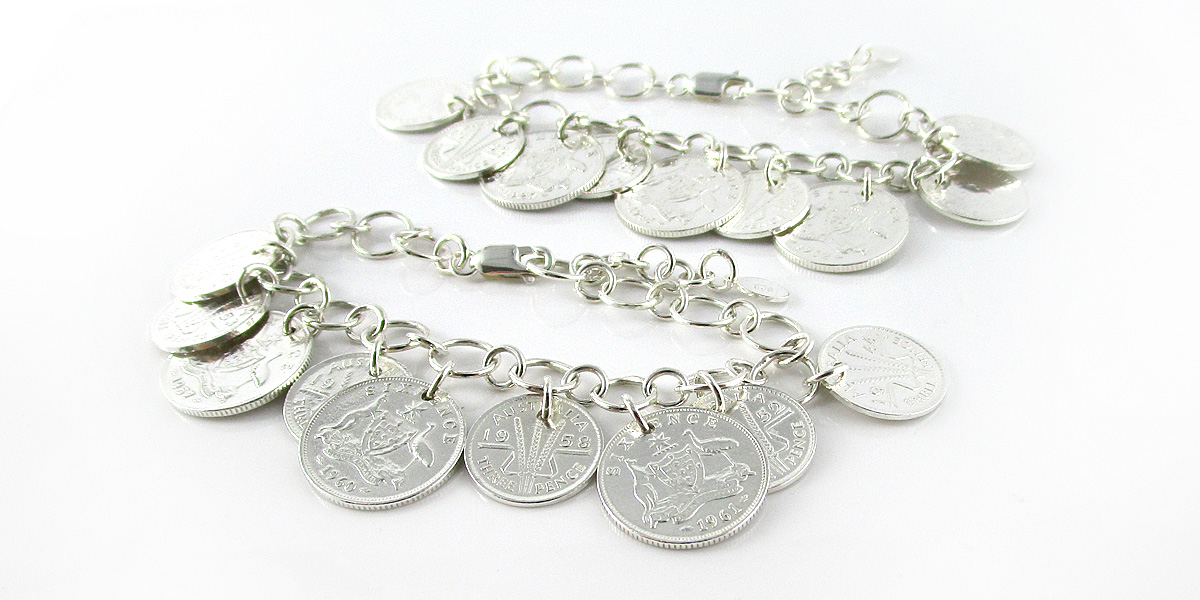 The coins were tarnished and a little damaged. So to clean them up I put them in a cleaning solution. This brought them up nice and shiny. Unfortunately, I could not fix the damage for fear of losing definition on the coins. Once they were clean though the damage didn’t look so bad.

I asked the customer what sizes she wanted the bracelets, but she said she was not sure. To give her an idea of what I meant, I showed her my wrist and she believed my wrist was the same. She thought that it would probably be best to make them both the same size.

As I have a small wrist I decided to make the bracelets 17.78cm (7 inches) long but thought that it would be best to add extensions to them so that they can be adjusted.

To make the jump rings for the bracelets I used 1mm sterling silver round wire. And as you can see in the photo I have a jump ring maker.

Some people do this with a jeweller saw. I have been thinking it probably would be easier to do that but I need some way to hold the jump ring coil so I can use the saw to cut it. I will have to think about this for further projects. Hum!!!

Now I have the jump rings ready to solder. My thought was to attach the small and the large jump rings alternately.

So, I decided to close and solder all the large jump rings so that all I needed to do was use the small jump rings to attach everything together.

Trouble With soldering The Jump Rings

Unfortunately, I had some trouble with this process. I found that while soldering the jump rings using the torch I would also solder the other jump rings together. Because of this, I would have to reheat them to free them and also have to be very careful not to melt the jump rings while doing this. This became quite an issue and now I think about it, it would have been better to have just taken the time and solder each jump ring at a time. HUH!! Hindsight!

Finishing Off The Bracelet

I finally got to the end of the bracelet and all I had to do was to add the six small jump rings for the extension. At the end of each extension, I also added a tag with a 925 stamp on one side and RRA signature stamp on the other.

Cleaning Up The Bracelet

Now the bracelet was ready to be popped in the pickle. Once out of the pickle I checked all the joints then once it is all fine I pop the bracelet into the tumbler to polish it up.

Putting Holes In the Coins

The next thing was to drill holes into the coins at the top. Doing this I needed to be careful not to destroy too much of the wording on the coins.

Using a punch I made an indent where I was going to drill the hole. This makes it easier to drill as the drill sits into the indent and keeps the drill from going all over the place. When drilling the hole I used a small drill first and then a larger drill in the diameter of the hole I want to make. I needed the hole to be 1mm in diameter as the small jump rings were going to be made from 1mm wire.

To make sure that the jump rings I was using to attach the coins to the bracelet would fit through the hole. I used the 1mm wire that I was going to use for the jump rings and tried it through the first coin I made a hole in. The wire went through just fine so I knew that it would all work well.

Well, I made the other bracelet the same way but the only thing I did differently was the way I soldered the jump rings.

As you can see they turned out really well and the customer was very happy.

1 thought on “Making a Silver Bracelet with Pre-Decimal Coins”