(204)
$24.99 (as of January 16, 2022 13:38 GMT +10:00 - More infoProduct prices and availability are accurate as of the date/time indicated and are subject to change. Any price and availability information displayed on [relevant Amazon Site(s), as applicable] at the time of purchase will apply to the purchase of this product.)

(4)
(as of January 16, 2022 13:38 GMT +10:00 - More infoProduct prices and availability are accurate as of the date/time indicated and are subject to change. Any price and availability information displayed on [relevant Amazon Site(s), as applicable] at the time of purchase will apply to the purchase of this product.) 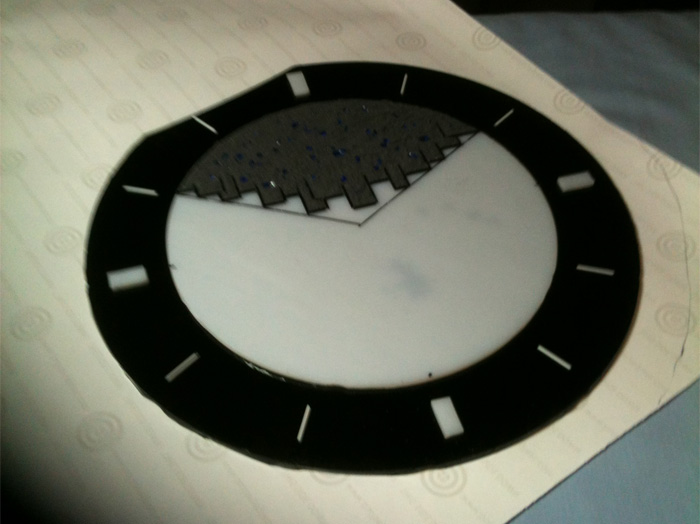 This was my first attempt at a fused glass clock face, but it was a bit of a disaster from the beginning. However, there are a few lessons to be learnt here.

First one is to take better photos. The one and only photo I have is by my iPhone and it isn’t great, but you should get the idea. Taking photos is a fantastic way of documenting your efforts, successes and failures. Combine this with details of the design, materials used, firing schedule and results and you have a great log for future reference. I just have to follow my own advice:)

The concept was a black and white clock face with a city skyline in silhouette. The black and white I felt would give a nice clean and simple feel that could fit into any décor.

All glass is BullsEye COE 90. The base is a circle of 3mm black, on this is a smaller circle of 3mm white. Sadly, when cutting the large black circle a small piece broke off, as can be seen in the photo. At the time of firing I put this piece back in place.

This was then fired to a full fuse in the kiln. I won’t provide the firing schedule as it wasn’t that successful.

So what was the result?

Well, it actually survived the firing and didn’t look too bad.

The small piece that broke off did fuse to the main body, but did leave a little indentation on the edge. I could have ground this out and fire polished the piece but I wanted to keep it as it was, mainly because it was my first attempt.

Everything else fused well, but was probably a little over-fused. The black base was only 3mm and started to pull inwards, due to surface tension, to a 6mm thickness. Maybe a tack fuse would have sufficed but I am not sure what would have happened with the black frit. That is something to test in the future.

All in all, it wasn’t too bad.

So now I had to drill a hole for the movement to fit in. A clock face without a movement is not much use.

I marked the position for the hole and placed the piece in a large plastic container, then poured enough water into the container to cover the glass by about 10mm. Using my electric drill and an 8mm diamond bit I proceeded to drill the hole. Starting the bit on an angle to get it to bite and then raising it vertically to finish the hole it all went swimmingly, pun intended.

Only problem, the container did not sit flat on the table and tended to vibrate up and down a little. This was a bit concerning but I managed to complete the hole without too much drama and the clock face was still in one piece.

Satisfied that all was well I fitted the movement and proudly hung it up in the studio.

At this point I noticed a little problem. The clock face tended to move around on the movement. If you bumped the clock face a little after setting the time the position of the hour markers changed and the time was out. I wasn’t sure how to fix that at the time, but later on was advised to place a small amount of silicone on the shaft of the movement and this will hold everything in place.

Then came the big disaster. Several days later, in the middle of the morning, Ann and I were woken by the sound of glass breaking. I checked the house and found nothing so went back to bed. The next morning when I went down to the studio I found the cause of the noise.

The clock face had broken across through the hole, separated into two pieces and fallen to the concrete.

So why did this happen? I suspect that when drilling on the vibrating base of the container a fine crack had started from the hole outwards. It wasn’t visible, but I believe it was there. Then, early in the cool of the morning, temperature change caused it to finally crack completely across the face.

So the lessons I learnt from this whole exercise are these –

Not too far in the future I intend to try another clock face. Stay tuned.

(165)
$7.99 (as of January 16, 2022 13:38 GMT +10:00 - More infoProduct prices and availability are accurate as of the date/time indicated and are subject to change. Any price and availability information displayed on [relevant Amazon Site(s), as applicable] at the time of purchase will apply to the purchase of this product.)