(286)
$19.29 (as of January 16, 2022 13:38 GMT +10:00 - More infoProduct prices and availability are accurate as of the date/time indicated and are subject to change. Any price and availability information displayed on [relevant Amazon Site(s), as applicable] at the time of purchase will apply to the purchase of this product.)

(89)
$6.99 (as of January 16, 2022 13:38 GMT +10:00 - More infoProduct prices and availability are accurate as of the date/time indicated and are subject to change. Any price and availability information displayed on [relevant Amazon Site(s), as applicable] at the time of purchase will apply to the purchase of this product.) 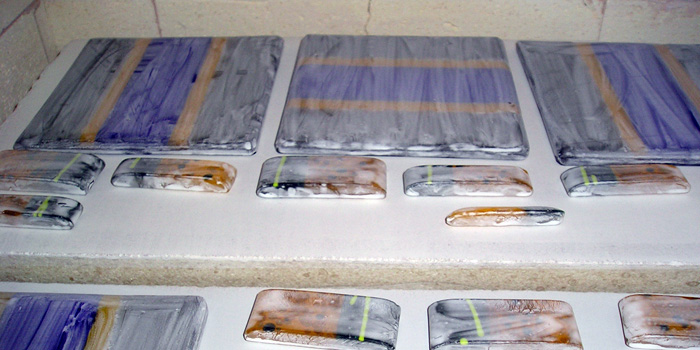 In an earlier post this month I talked about a set of coasters we tried that were deliberately made thin to see how the glass behaved. The project was 2 layers, the base 3mm and the top 2mm made it under 6mm and hence subject to surface tension stress to conform to the 6mm rule.

After firing, the sides of the coasters did pull in as expected, but worse, the iridised glass unexpectedly resulted in rough edges.

In this firing we decided to try to rescue the coasters, as well as fire polish a few jewellery sets we made from a fused glass slab.

To prepare the coasters I ground all edges back to straight sides. I didn’t take them back fully, just enough to remove all rough edges and the pulled in sides. The edges were then finished with a 120 diamond pad. I briefly sanded the full edge and then rounded the sharp edges.

In addition to the coasters I cut up a slab we made for jewellery sets. The slab was 5cm wide and about 21cm long. It had been fully fused in a previous firing.

Previously, I had purchased a tile saw for cutting glass but found the blade it came with was just too coarse and resulted in a lot of chipping along cut edges. To fix this we purchased a finer lapidary diamond blade. This had only just arrived so I decided to cut up the slab for this fire polish.

The slab was cut into several sets, each set consisted of 2 x 1cm strips for earrings and 1 x 2cm strip for a pendant feature. These were all ground to be uniform in width and the edges finished with the 120 diamond pad. The cut edges were not rounded, except for slight rounding of the sharp edges.

All ground edges were scrubbed and the pieces washed and coated with Fuse Master Super Spray anti-devitrification solution. This was applied with a soft artists brush, left to dry and then placed on a prepared kiln shelf, not kiln paper. This was my first attempt at using anti-devitrification solution, and I did not have a sprayer, so brushing was the only method I had available. You can see in the ‘before’ photo that the solution when dried showed all my brush strokes. This did concern me a little.

As you can see in the photo the coasters came up great. All edges rounded and polished nicely. There was no further pulling in on the sides due to the fact the fire polish schedule does not process at a high temperature.

But there was one problem. Some of the anti-devit solution must have run under the bottom of the coasters and a couple of the set pieces. This resulted in a stain that could not be removed with cleaning.

The lesson from this is that always clean any anti-devitrification solution off of the bottom of your pieces. A little research on the internet found some references to this being an issue, and in some cases causing damage to the shelf. So be sure to remove any solution from the bottom of pieces.

The brush strokes you can see in the ‘before’ photo didn’t seem to make any difference, that I can tell.

(3)
$17.90 (as of January 16, 2022 13:38 GMT +10:00 - More infoProduct prices and availability are accurate as of the date/time indicated and are subject to change. Any price and availability information displayed on [relevant Amazon Site(s), as applicable] at the time of purchase will apply to the purchase of this product.)