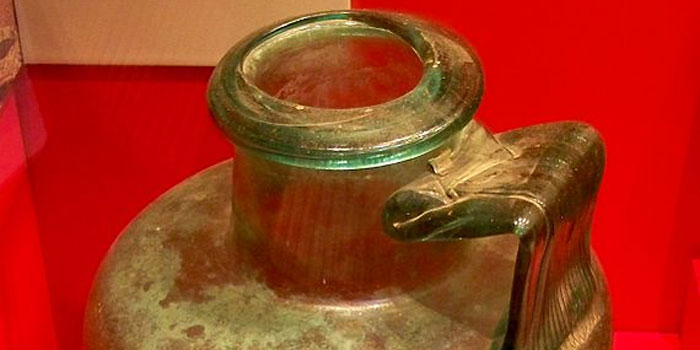 First, my apologies for the lack of posts lately. A number of personal things have been getting in the way, hopefully not any more.

For a while I have been reading a number of references to the start of glass fusing, historically. I suppose it depends on the literal meaning you adopt for ‘glass fusing’, but for me it is simple when someone started fusing pieces of glass together to create a useful or decorative object.

A little research has uncovered a couple of interesting facts.

Glass was discovered by accident on a beach.

Well, not sure how factual this is, but there is this story from Pliny the Elder, a roman author, and it is an obvious place for it to happen.

The story is that a merchant ship carrying nitrum was moored at the Belus River, Georgius Agricola. When preparing a meal on the beach they used lumps of nitrum from their ship to prop up their pots. With the heat of the fire this fused and mixed with the sand and out flowed a stream of a new translucent liquid, glass.

Sounds romantic, and I choose to believe it.

Glass fusing was around before glass blowing.

I suppose, when you think about it, it makes sense. It would have been the easiest method for constructing objects. Taking raw pieces of crude glass, heating it with a little manipulation and you have an object.

Very early vessels were ‘core-formed’. They were made by winding a ductile rope of glass round a shaped core of sand and clay over a metal rod, then fused with repeated heatings.

My research seems to point to archaeological evidence that the Mesopotamians had knowledge of glass working as far back as 3,500BC, in the form of glass beads. Other research suggests there is evidence of glass working, in the form of glazes for stone beads, as far back as 4,000BC. Much later, the Romans are credited with being better glass workers and there is some argument that they should be credited with true glass fusing.

For 1,000’s of years glass fusing and manual manipulation was the primary method for constructing glass objects.

Glass blowing didn’t actually come into general practice until the first century AD, replacing the older methods for making glass containers, though its invention is credited to the glass workers of Syria in the 1st century BC.

Basically, glass fusing is an extremely old method of working glass. As artists creating objects, practical and decorative, through glass fusing we are all in good company and I for one feel absolutely great about it.