(734)
$25.95 (as of January 16, 2022 13:38 GMT +10:00 - More infoProduct prices and availability are accurate as of the date/time indicated and are subject to change. Any price and availability information displayed on [relevant Amazon Site(s), as applicable] at the time of purchase will apply to the purchase of this product.)

(22)
$9.99 (as of January 16, 2022 13:38 GMT +10:00 - More infoProduct prices and availability are accurate as of the date/time indicated and are subject to change. Any price and availability information displayed on [relevant Amazon Site(s), as applicable] at the time of purchase will apply to the purchase of this product.) 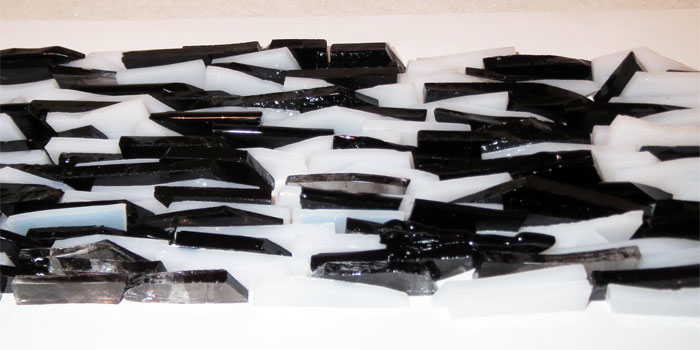 Well, that’s what I like to call them. They are black and white fused glass cabochons with a sort of stripe appearance, so ‘Zebra’ seemed like a good idea.

These came out of me looking at a lot of black and white glass offcuts and wondering what I could do with them. Stacking them into individual cabochons was an obvious solution, but I was looking for something a little different.

If I could do a pot melt that would have been another idea, but I’m not so confident with that.

I decided on trying to achieve a random stripe, a little like zebras. The problem was, how do I achieve this result.

The pieces I selected were all around 8-10 mm wide with varying lengths. Larger offcuts had to be cut into acceptable strips. There weren’t many of those so very little cutting involved.

Now stacking offcuts on edge is not an easy thing to do. My first attempts were simply painful. It soon became obvious that this approach was not going to work, at least not in my lifetime and not if I was to remain sane.

The solution was to create an inclined surface with a stop along the bottom edge. This was made from a couple of pieces of timber. I placed my first row against this stop, alternating black and white pieces to the desired width, then stacked the next row on this and so forth, working back up the incline until I built up to the desired width. The incline was just enough to keep the rows leaning against each other. I then dripped Hotline Fusers Glue glue randomly in between rows of pieces, hoping this would hold it all together.

First mistake – I put this all on a layer of paper so it didn’t touch the wood to keep it clean. Big mistake. The glue dripped through and later when I tried to move the stack it stuck to the paper. In future, I will try this on plastic sheet. I have stacked and glued on plastic before and it was so much easier to remove the stack. Why I didn’t think of that this time I have no idea. Senior moment again I suppose.

Anyway, the next day I managed to get the stack on kiln paper, with quite a bit of effort. It did separate in some places but as you can see it sort of stayed together as I had hoped.

I am sure there were pieces of the paper still stuck to the bottom of the stack, but I hoped they would burn off in the kiln without any issues.

Into the kiln, with all fingers and toes crossed, I put it through a full fuse. The firing schedule is below. This was fired on Bullseye Kiln Paper.

The next day I opened the kiln to a nice surprise. The stack had all fused together into something similar to what I was after. Some areas were a little blobby where I had placed too much black or white together, but overall it wasn’t bad.

There looked to be a little staining or devitrification on white, but this may have been too much glue.

The thickness did vary a bit but it was still level enough for capping later with clear.

Where is the photo you ask? Sorry, another senior moment and In forgot to take it before I proceeded to cutting it up, which I will post about in a couple of days.

But trust me, I’m not a used car salesman, it did fuse together quite well, without any real issues.

In the next post I will cover how I then cut this up and made some great black and white fused glass cabochons.

As usual, all the glass I used was Bullseye COE 90 fusible glass.

(11)
(as of January 16, 2022 13:38 GMT +10:00 - More infoProduct prices and availability are accurate as of the date/time indicated and are subject to change. Any price and availability information displayed on [relevant Amazon Site(s), as applicable] at the time of purchase will apply to the purchase of this product.)