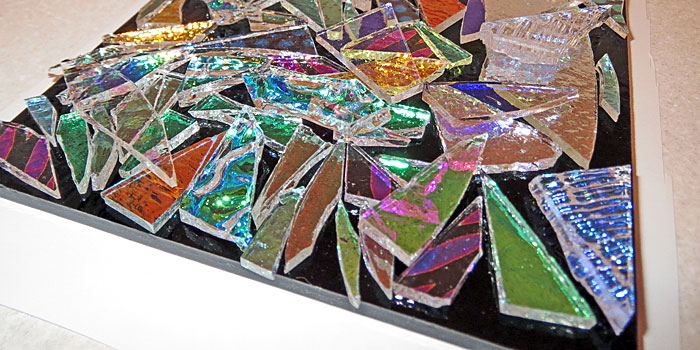 Believe it or not, up till now I have not made any dichroic cabochons. Yes, they are popular, but I really wanted to explore making cabochons with plain colours first. Getting glitz from dichroic seemed too easy so I waited for a while before giving it a go.

Anyway, finally I decided to make a dichroic slab to cut up into cabochons.

After a little research I decided to use the simple approach. That is to first fuse the dichroic to a black base, then to cut it up, cap with clear and then a final fuse into cabochons.

The reason I didn’t want to add the cap to the slab is to reduce bubbles. I reasoned that if I capped the whole slab bubbles would get trapped under the cap, especially towards the centre of the slab.

The tedious part was to cut up my scrap dichroic into small pieces.

The dichroic I have is basically a small pack of scrap pieces purchased from a local supplier. This meant I had a random selection of various shapes and colours to choose from. As they were all on clear I wasn’t absolutely sure what the final colours would be, but that was probably the best. Stopped any bias on my part.

So I picked scraps at random and then cut off random shaped small pieces until I had enough to layer up a 100mm x 100mm piece of 3mm black glass. As usual, all glass is Bullseye COE 90.

The pieces were placed on the black as random as I could. The base piece was layered up fairly full, but I did want to leave some black showing through so there were spaces remaining. A few pieces were overlapped, just to see what effect it would have.

The slab was then full fused (firing schedule below) on kiln paper.

Sadly, and I am sure disappointingly for you, I forgot to take a photo of the finished slab. But it turned out very nice. It mostly fused down into a single slab with just a little unevenness on the top.

Then onto making the cabochons.

I proceeded to cut the slab up into a number of pieces about 20mm x 30mm in size. Ground up the edges where necessary to make them nice and straight and remove any bad saw marks.

On top of this I placed clear caps just slightly larger than the base piece.

The ground edges were all scrubbed, everything washed and reassembled. As you can see in the photo the cabs were placed on Bullseye kiln paper and fired to a fuss fuse.

I was happy with the finished cabochons, mostly. A couple were a bit plain with the silver dichroic, but someone may like that.

A few were a little large so I do need to allow for that in the future. A couple did actually touch and fuse together.

If you look at the photo, in the bottom left corner, you will see a near disaster. The cap slid off one of the cabs. I know the base for that cab was a little uneven so I should have guessed. The cap nearly slid onto the unprotected shelf. If it had I would have had a problem removing the glass from the shelf. I suspect the shelf would have been permanently damaged.

In general, the process worked well. The colours are fantastic and Ann was over the moon with them, keen to use them in her jewellery.

2 thoughts on “Dichroic Slab for Cabochons”