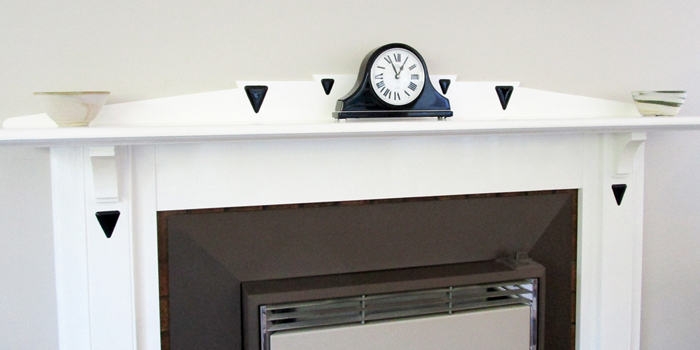 This is a simple little project that may give you some inspiration to use fused glass in new ways.

In our home we have a brick fireplace that has always looked quite bare. It has no mantle and really looks unfinished. So for a few years I have been looking for a suitable fireplace mantle to finish it off.

Finally, I found a very cheap, $20,  second-hand mantel that could do the job.

(20)
$26.95 (as of September 23, 2021 22:42 GMT +10:00 - More infoProduct prices and availability are accurate as of the date/time indicated and are subject to change. Any price and availability information displayed on [relevant Amazon Site(s), as applicable] at the time of purchase will apply to the purchase of this product.)

It wasn’t in great condition but with some cutting, sanding, filling, gluing and the addition of a couple of corbels it turned out quite well. But it needed something to finish it off.

Of course, the something missing was a few feature pieces of fused glass.

In this photo you will see the result, less paint, of all my sanding etc. The corbels I made from some Cypress timber offcuts I had lying about (I rarely throw things out). The back piece behind the mantle I designed to look a little Art Deco. This was cut from an offcut of Hoop pine.

The triangle features are to be inset and glued into the surround, but rather than chisel out the recesses and try to make the glass pieces to fit, I decided to make the pieces first and then recess the surround to suit.

So the first step was to cut out all the triangular pieces and full fuse. You can see I have two triangles for each piece. The firing schedule was simply a full fuse. You will find the schedule below.

You may ask why I didn’t do something a little more decorative but I really didn’t want anything that would detract from the mantle pieces I had in mind. They will come later.

Anyway, the result after the fuse was almost perfect, except for a little devitrification. That was not expected with plain black glass, but no problem. I simply sandblasted the pieces and then run a fire polish.

In the initial full fuse I didn’t hold at process temperature simply because I didn’t want the shape to change too much from the triangle.

The final result was perfect.

The next step was to then use each piece like a template, do the final markup on the surround and chisel out the recesses. This took a little care as I really wanted the pieces to fit neatly.

I then primed the entire mantle and finally glued all the feature pieces into place.

Prior to the final paint, I fitted the mantle to the wall. This was so I could recess the screws, fill them and apply a little primer. Then I applied the final two coats of enamel .

The end result is great. It completely finished off the fireplace and provided a great mantle for some new mantle pieces I intend to make at a later time.

(661)
$10.99 (as of September 23, 2021 22:42 GMT +10:00 - More infoProduct prices and availability are accurate as of the date/time indicated and are subject to change. Any price and availability information displayed on [relevant Amazon Site(s), as applicable] at the time of purchase will apply to the purchase of this product.)