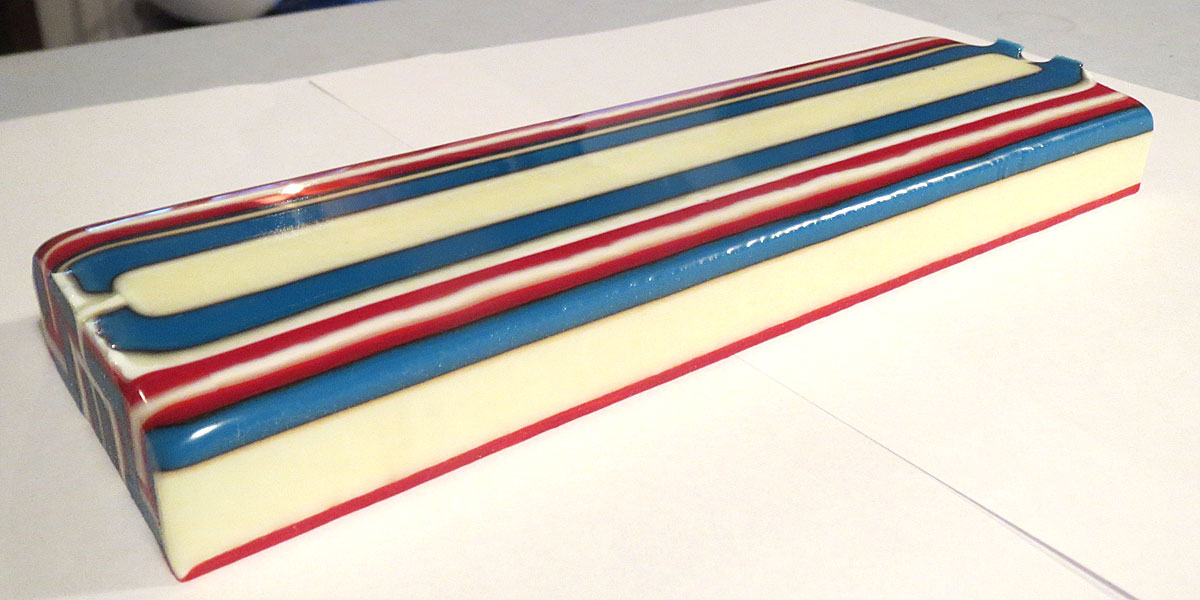 Don’t you just love fused glass pattern bars? They are so versatile. You can slice them up and use them in so many projects. And the possible patterns are endless.

This post shows how I made a simple red, white and blue pattern bar.

I decided on the red, white and blue because I am so patriotic…not really, I just wanted something classic and simple. Plus I had plenty of glass in those colours.

By the way, all glass used in this project is Bullseye 90 COE.

Basically, pattern bars are simply thick bars of fused glass that can be sliced into tile like pieces. They can be created via a number of methods, but the method I decided to use is strip stacking. That is simply the stacking up of glass strips in either a random or uniform pattern, then fusing that into a bar.

Given the size of my kiln and kiln shelf I decided my bar would be about 22cm (8.7 inch)long. The size was dictated by allowances for the kiln shelf sides of my mould, and more kiln shelf pieces to hold the form together.

To work out how much glass I needed I simply divided the 25 mm thickness by 3 ( 3 mm glass) to get the number of pieces that would fill the mould. This came to 8.3 so I just rounded up to 9. That works out at about 146 cm2. This comes in hand later.

The bar would be fused in a mould constructed from strips of old kiln shelf . Sorry, I forgot to take a photo of the mould but it is basically just 4 pieces of old kiln shelf stacked on edge on a kiln shelf, to form a box, and then lined inside with 3mm fibre board and kiln paper. I use Bullseye ThinFire. You can see the kiln shelf strips stacked up in some photos.

I expected my bar would be about 25 mm (1 inch) thick. Because the glass will naturally want to melt down and spread out to 6mm thick, it will put pressure on the sides of the mould. It is then essential you have some heavy supports against your form sides to support them. The more support the safer. You don’t want glass all over the bottom of your shelf.

For the lining of the mould I cut a piece of ThinFire kiln paper large enough so that the kiln shelf pieces for the sides of the mould sat on top of the paper. I then cut pieces of fibre bard to cover the vertical sides of the mould. These overlapped on the ends. Probably not needed, just me being careful. In fact your could probably just use kiln paper instead of the fibre board.

You can see the remains of the kiln paper and the fibre board in the photos of the fused piece.

The glass strips were all cut 22 cm long and in widths of 6, 12 and 15 mm. The varying widths just to mix it up a bit. Not necessary, and you could just have them all the same.

The strips were then laid up as a test to refine the pattern I would use. Once I was happy with the pattern I took a photo with my phone to refer to later.

The strips were all then cleaned and dried before reassembling the stack on the kiln paper. I always clean, even though most strips would end up inside the bar and later when the tiles were cut and worked any devitrification on the outside would be removed.

You can, of course, use any pattern you like, including just placing the strips in randomly. I preferred a more uniform pattern for this bar, though if you look hard you will see I made a slight mistake. Maybe that my OCD kicking in.

All of the glass I used is opalescent, but you could always use transparent and even mix it up if you prefer.

Because of the thickness of this bar the firing scheduled, shown below, needed to be exceptionally long. It takes a long time to fuse down that much glass.

Annealing of such a thick piece of glass will naturally take hours. I used Bullseyes article on annealing thick slabs to determine the annealing time. While my slab worked out great, without any drama, I would probably extend my times a little in the next slab. Just to be sure.

Well, I hope this is all a help. Give it a go. In some future posts I will show how I use this in other projects.